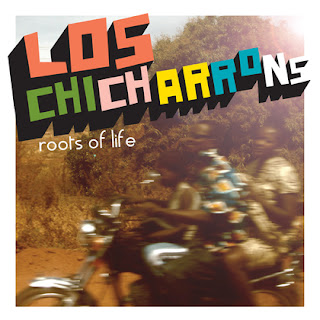 Los Chicharrons - ‘Roots Of Life’ (2010)
Tummy Touch Records TUCH2022CD, CD album, £6.99
http://tummytouch.greedbag.com/buy/roots-of-life-0/
There’s a certain feel that you get with a live rhythm section, a certain unmistakeable vibe of musicians responding to each other, and when they’re really good, they get that incredible tight/ loose thing happening, that, for me, is more danceable than anything else on the planet. So, there I was, on my first listen through to this album, digging the afro-funk beats, not paying too much attention, and then the track Bamako came on and sent me scrambling for the insert. ‘I know that groove,’ I thought, ‘that’s Mike Clark and Paul Jackson! Who’s playing on this album?’
And then I had to slightly adjust my view of electronic music. I listen to a lot of electronic music, across a wide range of genres, and most of it is identifiably electronic within half a bar: then there are the various brands of house music, that sound like a band grooving to start with, but are just too regular, precise and consistent to sound human when you listen. But this album has some of the most alive, natural sounding programmed bass and drums I’ve ever heard. I mean, okay, I don’t want to be too hyperbolic, I’ve heard some good, live-sounding feels, but this stuff had me fooled, and I am a major rhythm section nerd.
Listening more closely to Bamako, it lacks Paul Jacksons trademark upper register licks, and it’s too consistently repetitive to be him, but it’s a masterful recreation of that feel: other tunes, such as Roots Of Life, have a house feel, but still a very loose, human groove, with really sweet, organic sounds.
There’s a lot more to this album than drum and bass grooves. One thing that helps the live feel is that on most of the tracks there is manually played percussion, that slots precisely into the feel and the soundstage. There’s also some earthy, grooving brass, a smattering of guitar, and the vocals.
The vocals are what makes this record truly come alive. I don’t know as much as I’d like about West African music, but the singers are Malinese, and I think (from my limited experience) they’re from the Bamana musical tradition. There are men and women, with a variety of voices, but what they share is an expressive exuberance, a rhythmic melodicism, and a declamatory character that is never shouty, but always sweet and mellifluous, however powerful.
The first tune I heard was Ma Do Nar, which is included on the free Tummy Touch 2011 Teaser. It’s built around a bass tumbao that would’t sound out of place on a Los Van Van record, and layered with percussion, brass and a simple piano montuno, prodding away low in the mix: soaring over the top is a magnificent vocal performance from Saramba Koyaté. The thing about this tune, is that it doesn’t sound like a multicultural fusion: West Africa has had a long association with Cuban music, so the combination of voice and groove is not too surprising, but the main factor is that, once again, it sounds like a band playing the tune, sat in a studio together and jamming out a live take.
There are many wonderful moments among this album’s eleven tracks: the truly polyrhythmic groove on Koko; the (presumably programmed) bala and kora intro on Kounandi; the deep funk, and call and response vocals of Equal Opportunity. I could go on.
At the end of the day this is a producer record: two guys set out to make a album. They’re obviously possessed of real musical knowledge, but rather than renting a studio and tuning up their instruments, they prepared by jumping on a plane to Mali. What they came up with is musically deep, an irresistible call to get up and dance, and a consummate example of the producer’s art.
It would be interesting to find out about their working process: I’m wondering especially whether they started with the grooves, or did they record the vocals and then build the tracks around them? Either way, they’ve taken a variety of musical sources, both recorded and programmed, from a huge range of musical traditions, and combined them in a way that is so amazingly well integrated that it sounds like they just recorded a band. The arrangements are perfect, with that organic feel that normally arises from musicians negotiating their place in proceedings over a period of rehearsal and performance, and the mixing is so perfectly judged that all its artifice completely disappears.
But in the glory days of big money record production, both of those jobs would be carried out by hired hands: the producer’s task is to understand and steer all of the different processes involved in making recordings, to maintain a consistent sound and feel, to develop a narrative across and through all the cuts of an album, and ultimately to use their own (often technically undeveloped) musicianship to make the right creative decisions. These are the decisions that make the difference between a track that may have all the elements in place, but doesn’t quite work, or an album that may contain some great tracks, but just sounds like they were randomly assembled, and a product that simply sings with creative coherence and sonic integration, like this one does.
Posted by Oli at 05:04