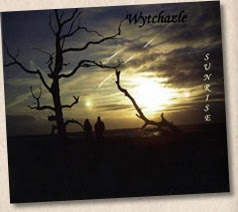 ‘Sunrise’ (2010), self released, CD, £8.50
http://www.wytchazle.co.uk
Wytchazle are an acoustic duo, performing in my neck of the woods (the east of England) for the most part. They were both experienced musicians in their respective fields before they came together: Daisy Windsor as a singer songwriter, and leader of a hard working acoustic band, The Floozies; and Robert Foster as a multi-instrumentalist, composer, arranger, record producer and author of a multitude of library music albums. Their arrangement is essentially that Daisy does what she does, and Rob uses his plenitude of skills to embellish, frame, enhance and polish it.
There are a couple of standards on here as well, where Rob accompanies and Daisy concentrates on singing. Daisy’s vocal delivery is different here from her treatment of her own material, but it is still recognisable, and certainly not mannered. She adjusts to the demands of the idiom, and applies the right nuances of expression to bring out the nuances of the lyrics, which is a challenging task with standards. Rob provides an idiomatic and tasteful reading of the harmony, on piano for My Funny Valentine, and on guitar for Summertime, which he approaches in more of a folk/ blues manner.
A lovely aspect of Daisy’s singing that comes through on this recording, and tends to disappear live, is the way she uses her breath: on the standards a ‘native’ jazz singer might think it technically correct to elide their inhalations, but here they add a fragile, ghostly sense of humanity. On her own material her inhalations often provide a rhythmic counterpoint to her deep, smooth, heartfelt singing.
Rob’s guitar and piano work throughout this album is impeccable, fluent, and impressively inventive, with a great tone and masterful control of dynamics. I was particularly taken with his varied and mellifluous blues rock obbligatos to Daisy’s vocal on Ruby.
As a composer Daisy has a found a voice that is distinctly her own: she tends not to approach her themes obliquely, preferring to find images and situations that can speak for themselves, and present them in simple language, short on embellishment or adjective and long on observational integrity. Her themes are not big themes, and they are not presented in a way that is overwhelmingly dramatic: lyrically, melodically and harmonically, hers are gentle songs, but they are often touching, and if you let them in, they can be moving.
This recording comes across as though it was made with very clear goals in mind, and that great care was taken to achieve them. It doesn’t beat you around the head with its accomplishments, in terms of either performance or production, but in both areas it is very skillfully realised, and more or less perfectly formed. 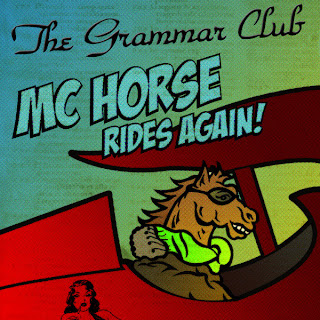 ‘MC Horse Rides Again’ (2010), self released, digital download, free
http://thegrammarclub.com/
Ever since I became aware of his existence Beefy has been my favourite nerdcore artist, both for his supremely funky flow, and for the fact that he brings heartfelt sincerity to a table characterised by a dry, distant irony. This is not to say that his lyrics are not humorous, and often satirical, but sometimes he just has some shit he wants to say, so he says it. I like that about him.
For those not in the know, nerdcore is an underground genre of hip-hop, in which geeky (predominantly white) rappers, with their tongues firmly in their cheeks, explore, satirise and celebrate aspects of geek culture and experience. It can be hilarious, intellectually stimulating, and occasionally moving.
Beefy is just a piece of The Grammar Club: ostensibly it’s a duo set-up, featuring him and singer Shael Riley, but it’s a wider collaboration than that, featuring no fewer than ten credited producers and ten featured artists (most of whom are the same people).
Nerdcore has really come of age: it used to be that some weak flows and dodgy production could make the cut, but standards are rising, and this is another release that raises the bar a little. The beats here are pretty organic, and although deeply funky they have a rock feel, like a slightly more electro Optimus Rhyme. There are a lot of instrumental parts that were tracked by the collaborators, which helps to make the whole thing more coherent, consistent and band-like.
The songs are full of the baroquely hyper-referential wit that you’d expect from a group of instigators at the top of the nerdcore game, but there is also a real concern for mood and storytelling. Rather than the extended, emotionally unengaged satires that even some of the best nerdcore artists create, these recordings are well rounded and satisfying.
Breaking Up With Brett, a song about the relative attractions of ‘nice’ and ‘bad’ girls, takes an old theme and makes it freshly entertaining, while Unemployment is really a taunt directed at the welfare system that funded Beefy’s early recordings; No Homo is a very funny and well observed tale exploring a young man’s reaction to a school friend’s coming out. Beefy’s best contribution is the dark and menacing A Team By Myself, in which he celebrates his considerable girth, although not without touching on the emotional difficulties of possessing such an impressive figure.
For me however, the show is stolen by Kabuto The Python, in character as MC Horse, with his rap on Crashing Cars and Awarding Stars. This is funny, funky, deeply nerdy, and satirises the vocabulary and word play of mainstream, sub-gangsta rap beautifully.
I found this album an extremely enjoyable listen: it made me laugh out loud, and it made me want to move, and you can’t ask for much more from any but the most exceptional recordings. I’d recommend it to existing nerdcore fans, and also as a good introduction to the style for anyone who’s ready to dip their toe in the waters of geek culture’s very own musical genre.
Posted by Oli at 09:29